Is your company involved in a field that includes the manufacturing of electronics, piping, aerospace, machining tools, or any alloys used in those industries? If so, then you need to be aware of Rule 1502 recently instituted by the Securities and Exchange Commission (SEC) regarding the use of conflict minerals that are most commonly used in those industries.

The SEC is proposing a rule (effective date November 13, 2012) to institute changes to the annual reporting requirements for companies who file reports pursuant to Sections 13(a) or 15(d) of the Securities Exchange Act of 1934. The proposed changes would require reporting standards regarding the use of “Conflict Minerals” that originate in the Democratic Republic of Congo (DRC) or an adjoining country thereof (referred to below as covered countries or DRC).

The Company needs to report via a Conflict Minerals Report (CMR) if the minerals that are necessary to the functionality or production of a product manufactured by said company originate from one of the covered conflict countries. Conflict countries include: Democratic Republic of the Congo, Central African Republic, South Sudan, Uganda, Rwanda, Burundi, Tanzania, Zambia, Angola, and Congo.

The CMR must include a description of the measures taken to exercise due diligence regarding the source of the minerals as well as the chain of custody for the minerals. This chain of custody would have to include a certified independent private sector audit of the Conflict Minerals Report provided by the above company. Also the issuer would be required to include a description of the products manufactured that contain any minerals that are not “DRC conflict free,” the facilities used to process said minerals, their country of origin, and of the efforts to determine the mine or location of origin with the greatest possible specificity.

3.    Once the company has confirmed that their conflict minerals originate in a covered country and did not come from a recycled source (or have reason to believe so) they must then follow a nationally or internationally recognized due diligence framework. The purpose of this due diligence is to establish the chain of custody and to pinpoint the source of the minerals (as accurately as possible). If during the performance of this due diligence the company finds that the minerals did not come from a conflict country they are no longer required to submit a CMR.

4.    After due diligence has been performed the company is required to submit the CMR as an exhibit to its Form SD. However, if the due diligence was unable to determine source or chain of custody the CMR must still be filed however under the determination that their minerals are DRC Conflict Undeterminable.

a.    For the minerals to be declared DRC Conflict Undeterminable the due diligence must not be able to determine the following:

b.    If after four years a company has not been able to confirm the source of their conflict minerals they will be required to report in their CMR that the minerals have not been found to be DRC Conflict Free.

What to include in a Conflict Minerals Report: 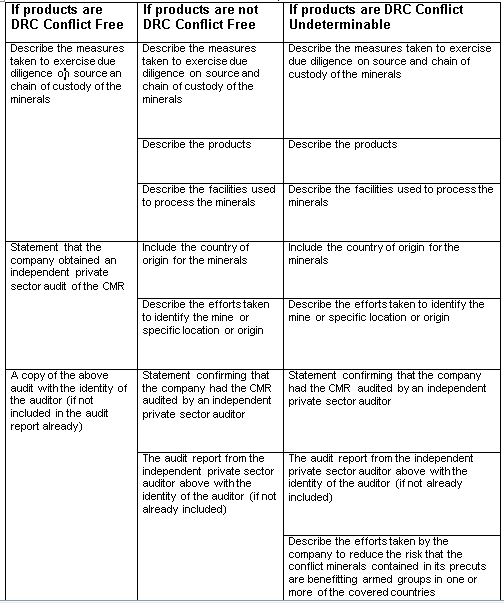 What to do with stockpiled minerals?
If the company has conflict minerals currently in inventory then due to the impracticability of tracing their origin companies will be allowed to exclude them by considering them outside the supply chain. This will only apply to minerals in inventory prior to January 31, 2013 and must meet the following requirements:
1.    Any cassiterite, columbite-tantalite, and wolframite minerals must already have been smelted
2.    Any gold must be already fully refined
3.    Any conflict minerals or their derivatives that have not been smelted or refine must have already been located outside of conflict countries

Reports pursuant to the rules above are required on a calendar year basis, regardless of fiscal year. They are due by May 31 for the prior year, commencing January 1, 2013. Based on these dates the first report is due on May 31, 2014 for the 2013 calendar year. If the minerals contained by the company’s products are considered DRC Conflict Undeterminable there is a transition period spanning the first two years (four years for smaller companies). During this transition period an independent private sector audit is not required as part of the CMR. However after this transition period has passed, if the company is still unable to determine that the conflict minerals did not originate in a covered country or that they did not finance armed groups then the company will be required to report in the CMR as “not been found DRC Conflict Free.”

Also after the transition period an independent private sector audit will be required. For all other companies the CMR reports with audits are required on May31 of the subsequent year.

If you would like additional information, please contact Allyn International at 239-489-9900 and choose Option 6 for the Global Trade Compliance Department or  sales@allynintl.com
Incorporated in the State of Florida in 1992, Allyn International is a boutique provider of logistics, corporate tax, and global trade services.  Our in-house Customs team has 6 licensed customs brokers on staff in the US and Europe.